Go to content
SOAP PRESSES
Soap machines manufacturers produce different models of soap press, also called soap stamping machines. Depending by the final shape of soap bars, the soap press are mainly divided in:
FLASH-STAMPING SOAP PRESSES
A flash-stamping soap press is used to produce bandless (soap without side band) and banded (soap with side band) toilet soap bars. The machines produce soap bars in a weight range from 10 up to 200 grams, in same case also bigger soaps.
In the past the most diffused automatic soap presses assembled a vertical rotating star with one or two cavities. The soap mould, called die-set, was composed of two matrices approaching and moving away from the star. This type of soap presses was used for many years but, due to the not optimal finishing of the soap bars, these machines was replaced by the horizontal and vertical flash-stamping soap press.
The first fully automatic vertical flash-stamping soap press was called "Condor" and was invented in the middle of the last century by an Italian company specialized is soap stamping machines. This machine was the ancestor of the modern vertical flash-stamping soap presses that are used today in soap industries.
8. Soap Finishing Line
8a. Soap Finishing Lines
8b. Soap Refining
8c. Mixers
8d. Soap Roll Mills
8e. Plodders
8f. Soap Cutters
8g. Soap Presses
8h. Chillers
8i. Accessories
>> INDEX 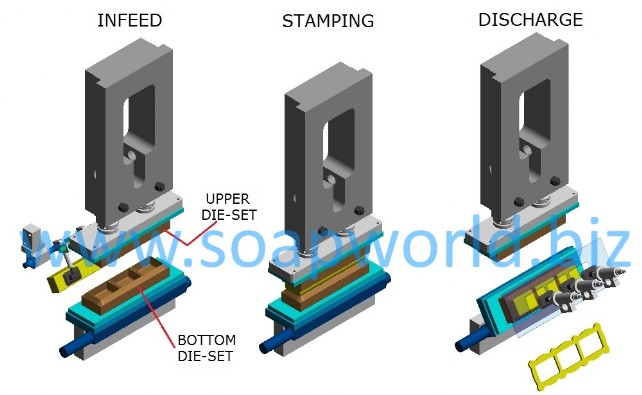 SOAP PRESSES FOR SOAPS WITH SIDE BAND
This type of soap presses are able to produce rectangular laundry soap bars, starting from rectangular soap bars that must be cut with the exact final weight because there is not flashing during the stamping. 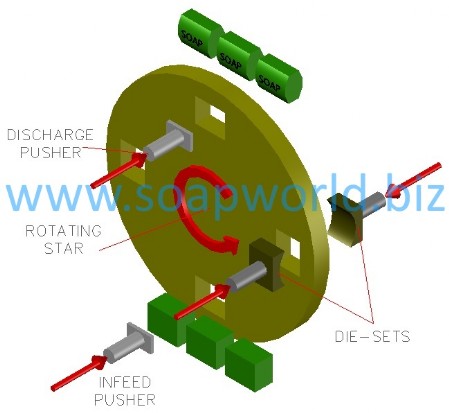 The rotating star has four stations each one with one cavity; each stroke gives one stamped
soap bars. When a big production is required, each station has two cavities; in this case each stroke gives two stamped soap bars.
These soap stampers in general are able to work at 90 strokes per minute. The die set is composed by the rotating star, the 2 inserts and by the 2 pushers, one for soap feeding and another one studied to push out the stamped soap bars.
SOAP PRESSES FOR CUBIC SOAP BARS
A special soap press to produce cubic soap stamped on 6 faces, like Marseille Soap was invented before the middle of the last century. In that period Marseille soap was very diffused and there was the necessity of an automatic production. 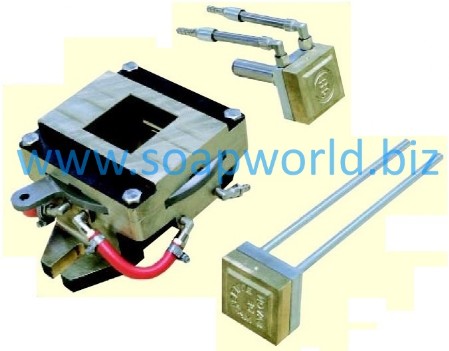 This special soap stamper is still sold in this period and it is used in developing African countries.
This is a vertical soap press with a special die-set composed by the upper die-set, the bottom die-set and a fixed die-set that includes the 4 lateral inserts. During the stamping stage, a level moves the 4 lateral insert in the same time. When the upper die-set moves up, the lower die-set extracts the stamped soap bar.
HOTEL SOAP PRESSES
Small hotel soap bars, from 10 up to 30 grams, can be produced using a specific type of soap press or also using a flash-stamping soap press. Specific models of soap presses, with short movements were studied to stamp hotel banded soap bars with a rate production of about 300 soaps per minute. This type of soap press usually assembles a horizontal rotating star with only one small upper die-set and bottom die-set. These soap presses are not flexible machines, because they are studied to produce only small soap bars, but they are small and cheaper stamping machines compared with flash-stamping soap press.
Back to content